Darling Irrigation took an undertaking to supply and install the new irrigation system for Forbes Golf Association. The system was based on a Toro Lynx 2 wire decoder control system with approximately 300 new DT series valve in head sprinklers for the fairways and approaches to the greens. In addition there was over 3km of PVC pipe for the new mainline and 9km of poly pipe for the fairways.

With all 18 holes and the practice green irrigated, players are now enjoying the benefits of higher quality greens, tee’s and fairways and the club is benefiting from lower operational overheads and increased membership numbers.

The Forbes Golf Association’s investment was to address the increasing costs of maintaining the old system plus ensure a higher level of automation to create flexibility for the watering schedule ensuring greater water use efficiency.

The project was supported by Darling Irrigation Wagga and the installation crew was made up of Forbes local people including Darren and Clayton Clark, Duane Hanley and the project site manager was Jack Clark. Volunteers made up from Club members and the committee from Forbes Golf Association assisted the ground crew in topping up any collapsed trenches.

The project has been labelled a huge success due to the quality of materials and workmanship plus the Darling Irrigation team were able to complete the project on schedule working around the Association’s other major commitments during the capital works program.

The exceptional efforts made by the installation team in the area of quality control is on display for all the Forbes golfers to see and enjoy.

Solutions for a range of mining projects across eastern Australia
Next Post: Pump power from the sun 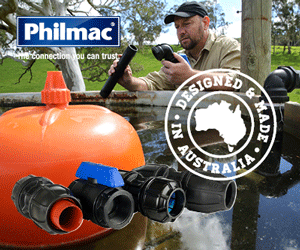