A team of researchers from the New South Wales Department of Primary Industries (NSW DPI) and the University of Western Sydney (UWS) are investigating the response of native forests to climate change in the Hawkesbury Forest Experiment.

As part of this experiment, Darling Irrigation was commissioned to design and implement an advanced, fully automated irrigation system with the ability to replicate seasonal and annual rainfall throughout 20 custom-designed chambers.

Results are now beginning to show the adaptability of Australia’s native forests to climate change.

Darling Irrigation has played a key role in the Hawkesbury Forest Experiment  which is examining the effects of climate change on Australian native vegetation.

Darling Irrigation has been responsible for the design and installation of a fully automated irrigation system that replicates the timing and magnitude of actual rainfall across a range of scenarios. This has allowed the assessment of the impact of altered precipitation on:

Ultimately, the information gained from this experiment will assist in underpinning future environmental and catchment management strategies.

Central to the experiment are 20, five metre high chambers which create a closed system around the vegetation.

Darling Irrigation has installed sprays in each of these chambers which simulate rain conditions under a range of scenarios by replicating the droplet size and coverage of a natural rain event.

Sophisticated control systems and water metres at each enclosure give the irrigation controller the ability to program and log ‘rain’ events and record responses in each of the chambers.

A key to the project has been the water storage and distribution facility  designed to ensure there is always sufficient water available to operate the programs, regardless of the sequence they are run in. A holding tank feeds a variable speed, multistage pump-set which provides the flexibility required to meet varying demands for flow pressure. Individual valve assemblies at each chamber regulate the pressure and ensure consistent ‘rain’ patterns and rates.

The most recent installation for stage two of the experiment which will enable scientists to examine the combined effects of rising temperature and CO2 concentration on tree growth and the associated physiological processes of native species under Australian conditions, has not been without its challenges. In addition to managing the irrigation installation process to coincide with construction progress, Mark Revell, Project Manager for Darling Irrigation, explains “the individual chambers were five metres high, so working at heights installing sprinklers was interesting.”

The positioning of the sprinklers has also been important to ensure that ‘shadowing’ effects from the structural beams of the enclosures are avoided so that the effect of the sprinklers, according to Mark, “is exactly like standing in a shower of rain.”

As stage two begins, results from stage one are beginning to shed light on the ability of Australia’s native forests to adapt to changing climatic conditions. Research scientist Dr Craig Barton says the team is uncovering promising results.

“Because these chambers encase the whole tree canopy, we are able to study the trees’ water, carbon and nutrient cycles and, crucially, the way they all interact under different conditions,” he said.

“Most trees can acclimatise to changes in their environment, but what we are finding is that these trees, growing in soils with low-nutrient status typical of most Australian conditions, are actually adjusting how they use their resources and are becoming more water efficient.

“This means they continue to grow as before but use less water.”

Typically, increased CO2 in the atmosphere triggers enhanced growth in plants, but in this case, the eucalypts seem to focus their efforts on water efficiency rather than increased growth rates. Water loss is much lower for trees in the chambers with elevated CO2.

“The potential implications here are that our native forests might survive drought better in the future,” Dr Barton said.

“In an area with low rainfall, the plants tend to use all of the available water and then batten down the hatches until the next rain event.

“Increased water-use efficiency under elevated atmospheric CO2 in these environments may result in higher productivity but no change in the amount of water used by the forest.”

The team working on the project is excited about the results that the upgraded chambers in stage two may bring.

Funding from the Education Investment Fund will enable tree growth and the physiological processes of new seedlings to be examined in chambers with varying combinations of temperatures and CO2 levels, as well as rainfall, resulting in more detailed results.

The 12-month extension of the project has been made possible by a funding grant from the federal Department of Agriculture, Fisheries and Forestry (DAFF). It is hoped that this will be further extended so that the trees can grow to maturity, providing results that can assist in the future management of natural forests and woodlands.

Darling Irrigation has worked on the Hawkesbury Forest Experiment with a number of collaborating parties, including:

Next Post: Increasing efficiencies with remote livestock and water monitoring 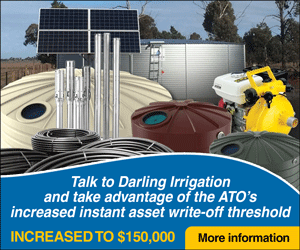